Do you know what the words "piola", "fome" or "fiaca" mean in English? Mastering slang words and phrases will make your Spanish sound natural, like a native speaker.

This article will teach you these slang words and many others. If you want to keep them in your pocket, try Spanish Translator + by VidaLingua. You can download it for free on your iPhone and Android.

Slang words vary a lot from country to country, even from city to city. Here you will find some of the most well-known ones, from different Spanish speaking regions.

Piola - It’s the way Argentinians say somebody or something is “Cool”. “chido” for Chilean Spanish speakers, “calidá” in Guatemala and “candela” in Venezuela.

Fome - This means “boring” in Chilean Spanish, it is a widely used word along the whole country.

Vaina - The English word of it would be “thing” or “stuff”, and in Chile it can be used to mean almost anything. It could also make reference to a situation, or action.

Chaval - The Spanish word for “boy” or “kid”. In Mexico, “chamaco”. In Bolivia, Uruguay and Argentina, “pibe”. In Guatemala, “wirito” or “gúirito”.

Duro - It means money in Spain. For example, “No tengo un duro” is “I don’t have money”. In Argentina they would say “centavo”. In Cuba, “chavos”.

Fiaca - This is the word Argentinians use to say that they feel lazy or they don’t really wan’t to do something. For instance: “Me da fiaca ir a trabajar” - “I don’t want to go to work”.

Pijo - The Spaniard word for “snobbish”. Its equivalent in Mexico is “fresa”, “cheto” for Argentina and “sifrino” in Venezuela.

Mono - The Cuban and Spaniard word for “Cute” or “Pretty”. Be careful - It also means “monkey”.

Buena onda - In Chile and Argentina it means “Cool”, and it can be used to say that somebody is cool but also for places or moments. In Spain they would use “buen rollo” instead.

Al tiro - It is a short expression used to say “right away”. It is widely used in Chile. For example: “Hazlo al tiro”. - “Do it right away”

Quilombo - This is a nice slang word from Argentina and Uruguay which means “scandal”, “mess” or “racket”.

Tinto - For Chilean Speakers it is the word for “black coffee”. In Buenos Aires, the capital city of Argentina, they would say “feca” as the slang word for “coffee”.

Mate - If you fall deeply in love in Cuba, they will say you are “mate”. Specially if you look desperate for someone.

Aguas - It is the slang Mexican short expression for “Be careful!”. Its equivalent in Chile is “pilas” and “ojo”, which is also used in Argentina.

Chamba - It means “work” in Peru. Chilean Spanish speakers would use “pega”, Argentinians “laburo”, and Spaniards “tajo” or “curro”.

Es la caña - It is an expression used in Spain to say that something or someone is “cool”. For example, “¡Esta fiesta es la caña!” - “This party is so cool!”.

¡Cómo mola! - Spanish people will use this expression to say that something is “Cool!”. In Argentina they will say “¡Qué copado!”, “¡Qué chido!” in Mexico, and “¡Qué chilero!” in Guatemala.

Ponerse como un tomate - We use this expression, “to become a tomato”, when someone gets embarrassed and goes red.

Tirar la toalla - “Give up” is the phrasal verb which suits best the meaning of this expression. An example could be: “Estaba cansado y tiré la toalla con la maestría”, in English: “I was tired and I gave up my master degree”.

Ser del año de la pera - If something is really old, in Spanish we say that it is “from the year of the pear” - A pretty funny expression, isn’t it?

Ser la oveja negra - This is a nice expression which literally means “To be the black sheep” and it makes reference to a person which is different or weird. It has a pejorative meaning.

No importa un pimiento - Or also: “Me importa un pepino”, it is the expression used to say that something it’s not important. Literal translation is pretty funny: I don’t care a cucumber.

Ser un ratón de biblioteca - It’s a nice expression for students. It’s used when somebody spends a lot of time studying, also as a synonym of “nerd”.

Dar en el blanco - The closest translation for this expression would be “hit the target”, and it is used when someone is right in what she or he is saying.

Tener mala leche - We say that someone has bad temper using this expression, which translated into English would be “to have bad milk”. It doesn’t make any sense, isn’t it?

Irse por las ramas - This expression is said when somebody loses his focus in the middle of an explanation and simply starts to give either too many details or switches the topic of the explanation easily, missing the point of it.

Estar en la luna - When somebody is absent-minded we use the expression “to be at the moon”.

Dar una mano - If you need help, you can ask somebody “to give you a hand”.

Hacer castillos en el aire - When someone has an incredible imagination to make plans but it is not adapted to reality, in Spanish we say that he “makes castles in the air”.

Estar como una cabra - In Spain this expression is used to say that somebody is a bit crazy, or completely crazy. The English equivalent would be “to be nuts”.

Comerse el coco - This Spanish expression can be literally translated as “to eat your coconut”, and it means “to overthink”.

Ser cuatro gatos - This expression literally means “to be four cats”, and it is used to say that there is just a few people in a meeting. For example: “Éramos cuatro gatos, así que cancelamos la reunión”, in English: “We were just a few of us, so we had to cancel the meeting”.

Tomar el pelo - The English equivalent for this expression is “pulling someone’s leg”.

Dar calabazas - This is a sad one. This expression is used to say that someone broke your heart and your love is not welcomed.

Have you written an article about language or travel? Email outreach@vidalingua.com to let us know. We might link to it!

Looking for lessons with interactive exercises to practice speaking and comprehension? Download Learn Spanish + for free on your iPhone or iPad. 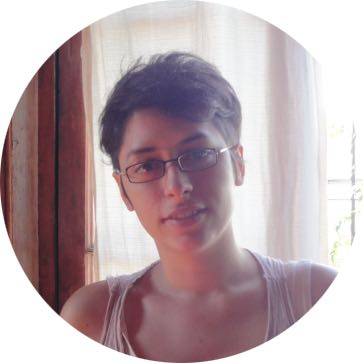