Conjugating verbs in Spanish is one of the most challenging parts of learning Spanish as a second language. This guide will help you learn how to conjugate verbs correctly for past, present and future tenses. You will find charts to master Spanish verbs ending in IR, ER, AR and more.

If you want over 400,000 Spanish verb conjugations with you where ever you go, try Spanish Translator + app. You can download it for free on your iPhone or Android. Give it a try and power up to fluent Spanish!


What Does it Mean to Conjugate Verbs?

In English, we conjugate verbs by changing verbs like to run into he runs, I run, and we ran.

Notice how we conjugate the verb differently depending on the perspective (who) and the tense (when).

We can visualize these differences in conjugation with the chart below.

In these tables, each cell represents a different “who.” When you see these verb conjugation tables, you can think of them as displayed in the chart below.


Usually the tables are abbreviated into a 2 column, 3 row layout rather than 3 columns and 4 rows, but the concept is the same.

For example, here’s a basic conjugation for the english verb to walk in the past tense:


To walk - Past Tense

The past tense is really easy to conjugate in English. You just add "ed" to the root verb and listo!

It’s much more complicated in Spanish, as you’ll learn, but the same concept applies.

How to Conjugate Verbs in Spanish

Conjugating verbs in Spanish requires an understanding of a few different concepts:


With those in mind, usually conjugations include the root of the word being conjugated minus the last two letters of the verb (ar, er, or ir).

In English, different tenses produce verb conjugations such as:

See how the verb tense effects the way we conjugate? The concept applies the same in Spanish. The most common tenses that you’ll conjugate are:

There are other tenses that we won’t get into in this article.

El preterito and el imperfecto are both past-tense conjugations. Learning which one is more appropriate will take time, but we can simplify with these guidelines.


Use el preterito when speaking about:

Use el imperfecto when speaking about:

For more on the imperfect vs the preterite tense, check out this article by our friends at Lawless Spanish.

In order to conjugate verbs, you must be speaking about a specific person or subject. There are only 6 perspectives you need to know, and they line up with the cells in the chart shown above.


The six perspectives for conjugating verbs are:

The perspective or the subject of the verb will change how it's conjugated.

In Spanish, it’s easy to tell when a word is a verb because all verbs end in one of these three ways.

There are different rules for conjugation depending on the last two letters of these verbs. In other words, Spanish verbs ending in AR are conjugated differently than verbs ending in ER and IR.

For the most part, what you'll learn in this article applies to any verb in the Spanish language. However, some verbs are irregular, meaning they get conjugated differently. They break the rules you're about to learn. It's important to keep this in mind, and you may want to keep a list of irregular verbs and their proper conjugations. A good one can be found on Fluentin3months.

Regular AR verbs are conjugated in the present tense like this:

In the present tense, verbs ending in ER and IR share the same method of conjugation:

Here are some examples of regular Spanish vergs ending in ER and IR in the present tense.

Regular AR verbs are conjugated in Spanish like this:

Tomar - to take, to drink

Regular verbs ending in ER and IR are conjugated into the imperfect tense like this:

Here’s an example of an ER verb conjugated into the imperfect tense:

Regular AR verbs are conjugated in spanish like this:

* Note that the first person plural (we) conjugation is the same in preterite tense as present tense.

Here’s some examples of regular AR verbs translated into the preterite tense:

Regular Spanish verbs that end with ER or IR are conjugated into the preterite tense as follows:

Let’s try conjugating an ER/IR verb into the preterite tense.

Unlike the other tenses we’ve learned about thus far, constructing a conjugation in the future tense doesn’t require you to discern between AR, ER, and IR verbs. All regular verbs are conjugated the same way in the future tense. Here’s how:

Instead of cutting off the last two letters like we’ve done on other conjugations, the future tense just adds characters onto the end of the verb.

For more instruction on using the future tense, go through this lesson by StudySpanish

One of the most important things to keep in mind while you’re learning Spanish is that not all verbs follow the rules outlined in this post. Many verbs you’ll come across are irregular.

Some of the other ways you might see verbs conjugated in Spanish are:

The translations of these phrases are as follows:


These conjugations represent additional verb tenses, which you’ll learn more about as you progress as a student of Spanish.


It takes a long time and persistent effort to learn to speak Spanish. Learn more about how you can cut your learning curve with VidaLingua.

Have you written an article about learning Spanish that we shoud link to? Email outreach@vidalingua.com to let us know.

Looking for lessons to improve your Spanish with interactive exercises? Download Learn Spanish + for free on your iPhone or iPad. 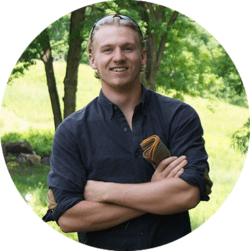